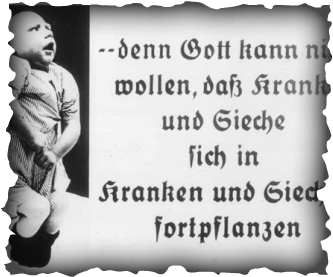 "...because God cannot want the sick and ailing to reproduce."
Just as the Nazi's sought to eliminate
all political threats, they also desired to rid Germany, as well as German held territories, of all threats to the purity of "German Blood and Honor".  Nazi racial ideology taught that survival of the German, or Aryan, race was extrememly important.  In order to maintain the purity of the race and insure its survival, the Nazi's began persecuting groups that they believed to be inferior and capable of polluting the pure blood of the Aryan, or German race.  These groups included, Jews, Roma and Sinti, Homosexuals, as well as mentally and physically disabled persons and those individuals that did not subscribe to social norms.  For more information on Nazi racial ideology click here.  For more information on the Nazi assault on the disabled click here.