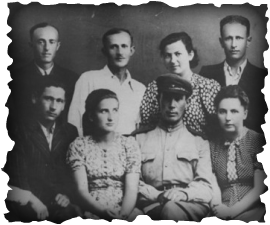 Portrait of Sobibor Resisters
RESISTANCE
As the Nazi government continued its campaign of dehumanization and anihilation, many groups and individuals, both Jewish and non-Jewish, stood up and resisted Hitlers' attempts to eliminate Europes Jews from history.  Resistance took many forms, and occurred in many different places during the Holocaust.  Reistance movements played out in ghettos and in camps, and could range from armed violent uprisings as was the case in Warsaw, Bialystok and Sobibor, or could be non-violent and take the form of sabotage, clandestine prayer, or simple record keeping.  It is important to know and understand that the many of the victims of the Holocaust did not go passively to their deaths.  In the face of unimaginable obstacles, many resisters showed great bravery and courage in an attempt to take their humanity back.  For more information on resistance movements during the Holocaust, click on the following links:  Resistance. Theresienstadt. Warsaw. 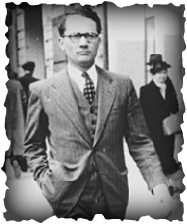 Click for more information on Varian Fry
RESCUE
While the Holocaust continued to engulf much of Europe and many chose the path of indifference, others chose to step in and save lives.  Rescue efforts took place in almost every nation accross Europe and were carried out by groups and individuals from varying ethnicities and religions.  Rescue efforts included simple actions by individuals, to complex networks that saved thousands.  Please take the time to follow the links below to learn more about rescue efforts during the Holocaust.  Rescue.  Danish Rescue.  Sendler, Siamaite, and Westerweel.  Personal Histories. Righteous Among Nations.