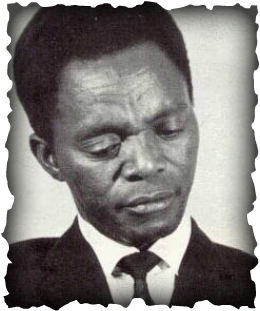 Grégoire Kayibanda, Rwandas first president.
1959 was a very pivital year in Rwandas history.  Since the end of World War II, Rwanda had seen much destabilization and turmoil.  Conflict between Hutus, Tutsis and Belgians was increasing.  By the mid 1950's Hutus had come to seen themselves as an oppressed group, and by 1956 they had begun to rebel.  By 1959 the Hutus had succeeded in taking control of the Rwanadan government.  Thousands of Tutsis were killed in the conflict and were stripped of land and positions of power within the government.  Over 150,000 Tutsis fled the country and became refugees.  The following year, the Belgians held democratic elections and the Hutu majority gained increasing power while the remaining Tutsis were ousted from power and the centuries old Tutsi monarch was no more.  By 1962 the Belgians had left and Rwanda had become and independent nation with power firmly in the hands of the Hutu majority. 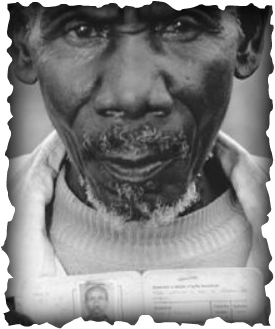 A Batwa holds up his identity card, which notes his ethnic origin.
The newly elected Hutu government began to establish new rules and regulations that penalized the remaining Tutsi minority.  Due to newly implemented quotal systems, Tutsi entrance into educational systems and the civil service were severly limited.  This increased the tensions between Hutus and Tutsis when combined with the high unemployment rates in the post-colonial era.  The Hutu government continued to enforce the Belgian policy of requiring ethnic identity cards, and strongly discouraged marriages between Hutus and Tutsis.  Ethnic conflict continued through the 1960's and as a result the Hutu government targeted political threats by banning opposition parties and executing Tutsi members of said parties.  Militant Hutus increased anti-Tutsi propaganda with the widespread use of the term "cockroaches" in reference to the Tutsi rebels attempting to infiltrate Rwanda.